JMS is a pickup hockey league

Give the gift of hockey! 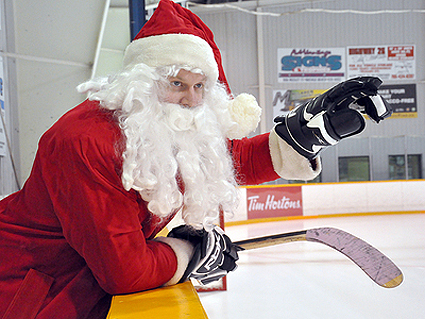 It’s the season to give, and what better to give than the gift of the greatest sport on earth?

To gift credits to a player, login to your JMS Hockey account and click the following link:

I started playing hockey when I moved back from California, around 6th grade. I played Pee Wee, Bantams and Jr. Gold for Hastings until I graduated in 1998. Fast forward—my 5 and 7 year old wanted to give hockey a try so I volunteered to coach. Being back on the ice gave me the hockey bug to start playing again.

I hadn’t played since 1998, so my gear was a little outdated and I went to Play It Again Sports to gear up. When talking with the guys at the store, they mentioned JMS as a good option for pickup and rec league hockey.
I looked it up on the web and signed up for a Saturday night all-level skate at St Thomas. It was exactly what I was looking for: organized, parity-based for good competition, but laid back enough so you don’t get an overly competitive atmosphere.

My favorite thing about JMS is its organization. You don’t have to worry about games being lopsided, goalies showing up, collecting money at the rink, etc. The website and sign up application is also very impressive, well thought out and again organized.

The best time I’ve had so far was my first league game. It had been a long time since I played an actual game with a clock, refs and a scoreboard! I was pretty excited for sure . . . the two goals that night helped cap a great night!

Whether it is a laid back pick-up game or a more competitive league game, JMS has something for everyone!